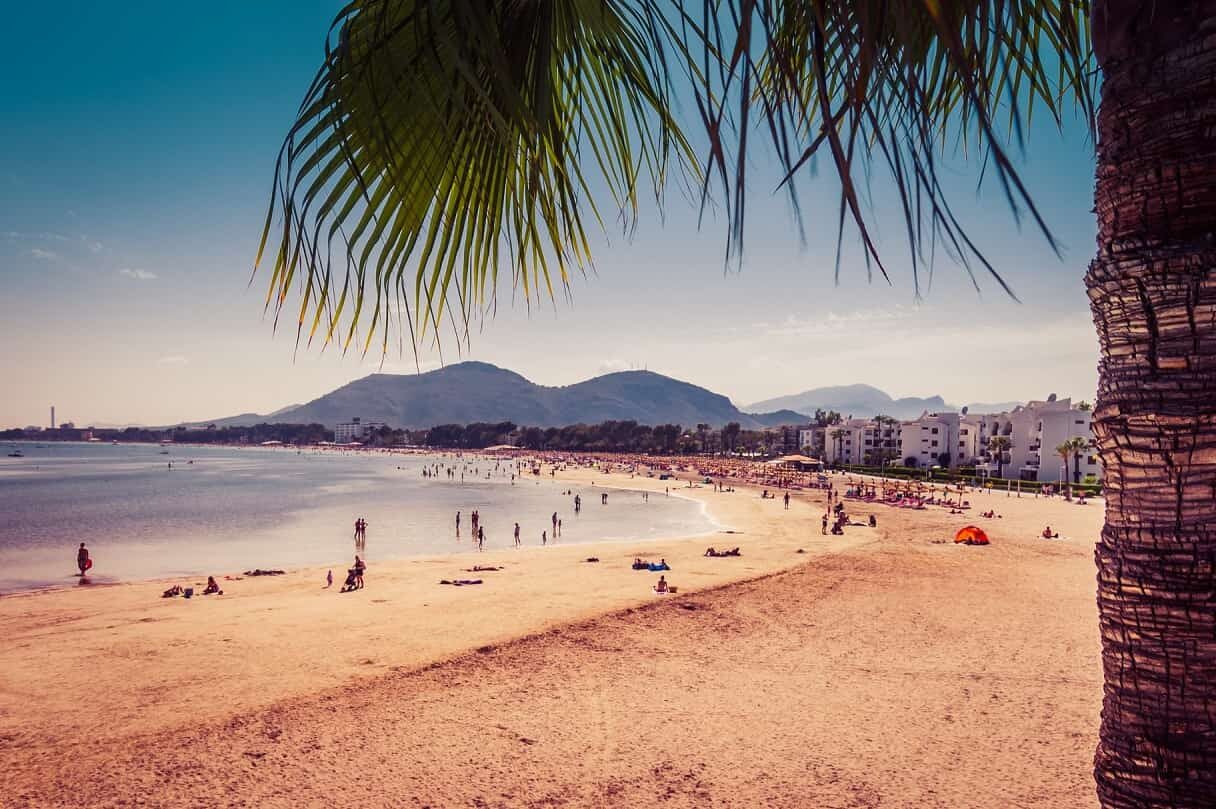 Where to travel in June 2022? Top destinations in Spain

As summer approaches, Spain becomes one of the best destinations to travel to.  The weather isn’t as hot and prices are cheaper than in the height of summer, but that’s not the only reason to visit Spain in June. You also have the chance to take part in a number of summer events and festivals taking place all over the country and get a head start on the crowds of tourists arriving in the following two months. Find out which are the best destinations to travel to in June in Spain.

Barcelona is Spain’s most visited city, mainly because of its Mediterranean location, cosmopolitan atmosphere and iconic architecture. The Catalan capital is rich in architecture, art and culture, and has everything you need for your ideal city break in Spain.

Everywhere you go in Barcelona you will come across the works of Antoni Gaudí, and the city boasts several UNESCO World Heritage Sites. In this city you can visit the Sagrada Familia, the Park Güell, one of the most beautiful concert halls in the world that is the Palau de la Música Catalana, or the Casa Milà, one of the wonders of the artist Antoni Gaudí. At the same time, Barcelona is the ideal city for dining and drinking, shopping, relaxing on the beach and immersing yourself in the vibrant nightlife.

Enjoy some of the best beaches in the Mediterranean, such as Barceloneta. And if you prefer the mountains, you can climb Tibidabo, Montjuic or Turó de la Rovira for extraordinary views of Barcelona and the ocean.

In addition, Primavera Sound, Spain’s most famous rock festival, is held between 2 and 12 June.

Malaga is another of the most visited cities in the country, with the arrival of summer its streets fill with tourists. The capital of the Costa del Sol is known for its historic centre, its unmissable monuments, its privileged climate, its seaside resorts and its beaches ideal for relaxation.

Picasso’s hometown is dominated by the hill of Gibralfaro, which is home to two Moorish remains that have become symbols of Malaga: the Alcazaba fortress and the Gibralfaro castle, built in the 14th century to protect the Alcazaba, from where you can enjoy a magnificent view of the cityscape and the Mediterranean Sea. Malaga is an attractive city thanks to its many must-see sights, such as the sumptuous Catedral de Malaga, the splendid botanical garden of the Finca de La Concepción or the ruins of the Roman Theatre. You can also explore the Contemporary Art Centre of Malaga, the Carmen Thyssen Museum and the Picasso Museum, housed in the 16th century Buenavista Palace.

On the other hand, you can enjoy a few hours of relaxation on the incredible beaches of this city, such as Malagueta and Pedregalejo. And then dance the night away in one of the most exclusive clubs. In the capital of the Costa del Sol there is no shortage of daytime and night-time activities.

Majorca is another of the best destinations to travel to in June in Spain. When you think of Majorca, you think of the beautiful beaches and the parties in the resorts of El Arenal and Magaluf.

Mallorca is synonymous with party and beach, and the main tourist attractions are in Magaluf, such as the water parks, the diving centre, the beach, the discotheques… You can also discover its incredible landscapes such as the Mondragó Natural Park or the Cabrera National Park. Another option is to choose from the infinite number of nautical activities on offer on the island. If you are more of a mountain lover, you will love the Sierra de Tramontana mountain range. And finally, don’t miss the Cuevas del Drach, one of the must-see places in Mallorca.

Crystal clear waters, picturesque villages, friendly people and amazing nightlife are some of the things that make this Balearic island such a popular holiday destination.

Shaped like a heart, La Palma is a beautiful island in the Canary archipelago with lush vegetation, and is also known as Isla Bonita. It has authentic natural landscapes, such as its impressive volcanoes, lush forests, crystal-clear beaches… Not for nothing was it declared a “Biosphere Reserve” by UNESCO in 2002. A simple getaway to this island would be a mistake because it can constitute a trip in itself.

With the eruption of the Cumbre Vieja volcano, many curious people have visited the island to see its effects, but there is much more to La Palma. Hiking enthusiasts can enjoy the beauty of El Bosque de los Tilos, the Caldera de Taburiente National Park, the Ruta de Los Volcanes and many other natural sites. You can also relax on the beautiful beaches, such as Nogarte, Tazacorte, Piscinas de la Fajana or Charco Azul.

In addition, the island is protected from light pollution by law, so you can also enjoy incredible views when night falls. Finally, you can’t leave La Palma without visiting its charming villages, especially its capital, Santa Cruz de la Palma.

Alicante, the Costa Blanca’s flagship city, has always been a popular destination for tourists. With more than 200 kilometres of beaches and almost 330 days of sunshine, this Mediterranean city will enchant you.

We love its narrow streets, lively squares, shopping streets and restaurants serving traditional paella. For relaxation, nothing beats a picnic on one of the amazing beaches of the Costa Blanca, such as San Juan, Albufereta or Postinguet. Or a stroll along the Spanish esplanade on the promenade.

History buffs will want to head to the Santa Cruz quarter, the oldest in the city, to admire the colourful and flowery facades of the houses. And if you want a panoramic view of the Mediterranean coast, head to the Castillo de Santa Barbara. This historic gem, dating back to the 9th century, sits atop Mount Benacantil at over 169 metres high, overlooking Alicante. From here you can see that the city is a mixture of provincial tranquillity and urban activity.

In addition to its famous fortress, Alicante is also well situated for boat trips on the open sea. A small boat can take you to Tabarca Island, the smallest inhabited island in Spain and known for its unique flora and fauna.

It is also worth mentioning that on the 23rd of June, different communities all over Spain celebrate San Juan. But possibly the most famous celebration takes place in the city of Alicante, where it is celebrated with bonfires, mascletás (a kind of firecrackers), parades and music until the early hours of the morning.

As you can see, there is a lot to discover in this city. Whether you are on holiday in Spain or just want to spend a weekend, Alicante is a destination not to be missed.

San Sebastian has a rich historic centre and magnificent, perfectly preserved monuments. First of all, we recommend you take a stroll through the cobbled streets. Don’t miss the Church of San Vicente, built in the 15th century in Gothic style and home to a magnificent Romanesque altarpiece. The Basilica of Santa Maria, built in the 18th century in baroque style, is also worth a visit, with its magnificent façade and interior. Don’t forget to stop by the beautiful Plaza de la Constitución, a huge square with a great atmosphere all year round. And finally, a visit to the remarkable Buen Pastor Cathedral, one of the symbols of the city. This monument, inaugurated in 1897, houses the largest organ in Spain.

The San Telmo Museum is another of San Sebastian’s must-sees. Housed in a former 16th-century Dominican convent, you can admire numerous paintings and learn about the history of the Basque Country.

You can also go hiking on Mount Igueldo and Mount Urgull. On Mount Igueldo, which offers a beautiful walk along the sea, you can discover the breathtaking view of San Sebastian. The Tres Coronas Natural Park, located about twenty kilometres from San Sebastian, is another ideal destination for nature lovers who want to enjoy the magnificent landscapes of the region.

La Concha Beach is one of the most famous beaches in Spain and Europe, offering great views of the city and perfect for a stroll with the family. And if you have some time to spare, you can take a boat to Santa Clara Island, which lies just in front of La Concha Bay.

A visit to San Sebastian is guaranteed to seduce you with its cultural dynamism, its exceptional landscapes and its atmosphere, which is very different from the rest of the country – a guaranteed change of scenery!

What do you think? Have you decided where to travel in June in Spain? Don’t miss these destinations, and remember that you can travel quickly and comfortably with Mitaxi.net. 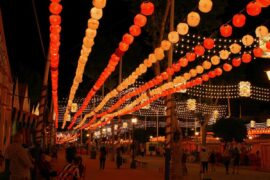 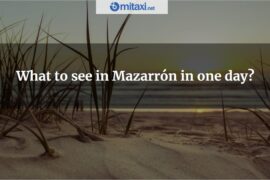 What to see in Mazarrón in one day? 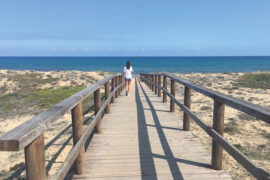 What to see in Torrevieja – Private taxi on Costa Blanca 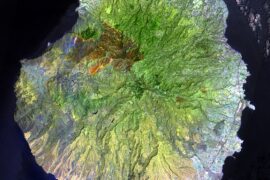 What to see in Gran Canaria

20 April, 2020
We use our own and third-party cookies to improve our services and show you advertising related to your preferences by analyzing your browsing habits. If you go on surfing, we will consider you accepting its use. You can change the settings or get more information here    See
Privacidad